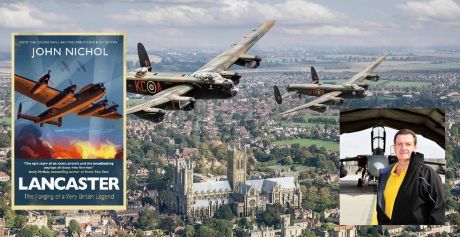 Join former RAF Officer John Nichol for a discussion about his career and his books including his most recent publication LANCASTER - The Forging of a Very British Legend. John will be talking to Our Bookshop owner Ben Moorhouse.
Your ticket comes with your chosen signed book and a FREE poster (whilst stocks last).

Your ticket to the virtual event includes either a signed Hardback copy of LANCASTER or a signed Paperback copy of SPITFIRE (his previous book). Free local delivery (5-miles from Tring) to your door or you can collect from the shop. Or a postage option if you live further afield (within the UK).

During 15 his years in the Royal Air Force John Nichol served as a Tornado Navigator in both the Air Defence and Ground Attack roles.  He was shot down on the first low-level, daylight raid of the first Gulf War in January 1991.  Captured and tortured, he was paraded on television provoking worldwide condemnation and leaving one of the enduring images of the conflict.  He returned to active duty and was involved in policing the exclusion zone as part of the UN force maintaining the fragile peace in Bosnia.  He has served around the world from the Nevada Desert to the Middle East and Norway to the Falkland Islands.

He has been a consultant and presenter for GMTV, Newsnight, BBC, Sky & ITV News, The One Show, CNN and Cutting Edge. John has presented a number of documentaries including What The Dambusters Did Next, John Nichol Flies, and Airshow World. John supports a number of military charities including The Soldiering On Through Life Trust, Combat Stress – Veterans’ Mental Health, BLESMA – The Limbless Veterans, The Royal British Legion and Help For Heroes. He is also a very poor golfer.

John’s latest book is LANCASTER – The Forging of a Very British Legend – a passionate and profoundly moving tribute to the iconic World War II bomber, its heroic crews, and the men and women who kept her airborne during the country's greatest hour of need.

Of the 7,377 Lancasters built during World War II, more than half were lost. The human cost of the RAF’s bomber war was staggering; of the 125,000 men who served in Bomber Command, over 55,000 were killed and another 8,400 wounded. Some 10,000 survived being shot down, only to become prisoners of war. In simple, brutal terms, bomber aircrew had only a 40 per cent chance of surviving the war unscathed.

This is their story.

The first 40 orders get a FREE double-sided poster (Lancaster one side and Spitfire the other).