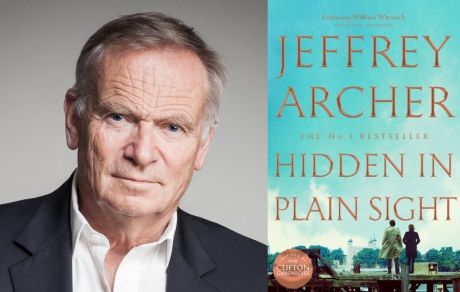 Jeffrey Archer, bestselling Author and former Member of Parliament will be in conversation with us to promote his new book. Ticket includes a hardback copy of his new novel, HIDDEN IN PLAIN SIGHT. Signed books and signed bookplates available whilst stocks last.
Event hosted by Our Bookshop and Tring Book Festival.

Your ticket to the virtual event includes a HARDBACK COPY of HIDDEN IN PLAIN SIGHT, The first 60 copies are signed, after that you will get a signed bookplate. Free local delivery (5-miles from Tring) to your door or you can collect from the shop. Or a postage option for an additional £3.50 if you live further afield (within the UK).

Educated at Wellington School, Somerset, and Oxford University, Jeffrey Archer gained an Athletics Blue, was President of the University Athletics Club, and went on to run the 100 yards in 9.6 seconds for Great Britain in 1966.
Jeffrey has served five years in the House of Commons and twenty-eight years in the House of Lords.
Jeffrey’s first novel, Not a Penny More, Not a Penny Less was published in 1975 and was sold to 17 countries within a year. His third novel, Kane and Abel (1979), has sold over 7 million in the UK paperback edition alone.
Now, with 37 books, 275 million copies sold and 27 Sunday Times number one bestsellers, Jeffrey Archer is a global publishing phenomenon.
He has been married to Dame Mary Archer DBE.
They have two sons, two grandsons, two granddaughters, and live in London and Cambridge.