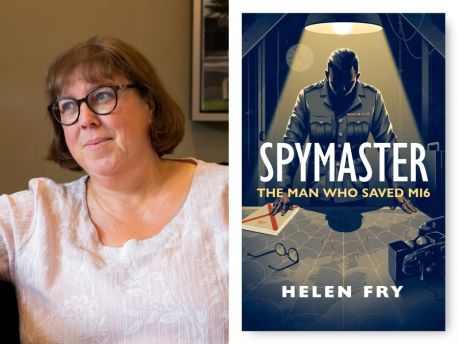 "You probably haven't heard of Thomas Kendrick and that's the way he'd have wanted it"
Join author and historian Helen Fry as she tells dramatic story of a man who stood at the centre of British intelligence operations, the ultimate spymaster of World War Two.
Helen is in conversation with fellow author and historian, and good friend of Our Bookshop, Roger Moorhouse.

Thomas Kendrick was central to the operation of MI6 during the Second World War. Under the guise of ‘British Passport Officer’, he ran networks across Europe, facilitated the escape of Austrian Jews and would later go on to set up the ‘M Room’, a listening operation which elicited information of the same significance and scope as Bletchley Park. Yet the work of Kendrick, and its full significance, remains largely unknown.

Helen Fry draws on extensive original research to tell the story of this remarkable British intelligence officer. Kendrick’s life sheds light on the development of MI6 itself – he was one of the few men to serve Britain across three wars, two of which while working for the British Secret Service. Fry explores the private and public sides of Kendrick, revealing him to be the epitome of the ‘English gent’, easily able to charm those around him, and scrupulously secretive.

Thomas Joseph Kendrick was one of the most senior spymasters of the British Secret Service in the 20th century. From the shadows of a clandestine world, he tracked Communist agents across Europe in the 1920s and Nazi spies in the 1930s from his headquarters in Vienna. The head of MI6 placed him at the heart of espionage in Vienna as the British passport officer, but this was a cover for his true role in running spy networks into Czechoslovakia, Hungary, Italy and Nazi Germany.
After Hitler annexed Austria in March 1938, the courageous spymaster embarked on a humanitarian mission to save Austria’s Jews. He issued fake visas and papers for those who did not qualify for emigration, saving up to 200 Jews a day – in an extraordinary legacy for which he has yet to be fully recognised. He is credited with saving over 10,000 Austria Jews.
Dubbed ‘the elusive Englishman’, his real identity eluded the Hitler’s Secret Service (the Abwehr) until his betrayal by a double agent in the summer of 1938. Kendrick faced ‘Soviet-style interrogation’ from the Gestapo, before being expelled for spying. He returned to London and behind the scenes in the Second World War headed one of the most important intelligence operations that shortened the war and saved thousands of lives. At the heart of it were German-Jewish refugee “secret listeners” who eavesdropped on prisoners’ conversations and Hitler’s Generals in captivity. The spymaster’s work saved MI6 from a number of intelligence disasters that threatened its very existence and the survival of Britain.

"You probably haven't heard of Thomas Kendrick and that's the way he'd have wanted it but his story deserves to be told. Helen Fry's book uncovers the amazing hidden story of an espionage pioneer who risked the wrath of the Gestapo to rescue Austrian Jews". Robert Hutton , author of Agent Jack

"A fascinating account of a very singular the remarkable story of a rather obscure intelligence professional who had quite an impact on modern history." Nigel West , author of Spy Swap: The Humiliation of Russia's Intelligence Services

"Rescues from history the untold but important story of the M I6 officer who helped save so many people from the clutches of the Nazis in late 1930s’ Vienna. A really fascinating read.” Stephen Dorril , author MI6: Fifty Years of Special Operations

About the author
Historian and biographer Helen Fry is the author of Yale books MI9 (2020), The London Cage (2017), The Walls Have Ears (2019) and more than twenty books focusing on intelligence, prisoners of war, and the social history of World War II. Helen is available for events, features and interviews.