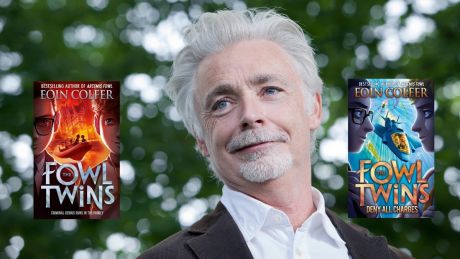 Join the amazing Eoin Colfer for a free event as he talks with Tabitha Clarke about his life, his writing and his new series The Fowl Twins. The Event is open to children at home and school classes and we'll be taking messaged questions from viewers during the event.
Event suitable for students in School Years 5,6 & 7.
Event length - 45 minutes (including 20 minutes questions from the audience)

Eoin Colfer is the author of the internationally bestselling Artemis Fowl, which was named the public’s favourite Puffin Classic of all time. The Artemis Fowl series has sold in excess of 25 million copies and translated into 40 languages.

THE FOWL TWINS: DENY ALL CHARGES BY EOIN COLFER (Hardback £14.99)

The second instalment in the blockbusting spin-off series from the global bestselling, sci-fi fantasy favourite Artemis Fowl
Artemis Fowl's little brothers Myles and Beckett are back with a bang – literally. Borrowing the Fowl jet without permission probably wasn’t their best decision. When the jet ends up as a fireball the twins are lucky to escape with their lives and are immediately placed under house arrest by their exasperated parents and the fairy police force. But who was tracking the Fowl jet? And why would someone want to blow the twins out of the sky? Unfortunately, there’s no time to ponder these questions as Myles is abducted and spirited away from his twin. Now Beckett and their fairy minder, the pixie-elf hybrid Lazuli Heitz, must work together to find Myles and rescue him – not so easy when it was Myles who was the brains of the operation. Their chase will take them across continents, deep underground, and into subaquatic super villain lairs. They will be shot at, covered in spit, and at the receiving end of some quite nasty dwarf sarcasm. But will Beckett be able to come up with a genius plan without a genius on hand…?
The Fowl Twins: Deny All Charges is another exciting return to the Fowliverse for new fans and old.

A blockbusting spin-off series from the global bestselling, sci-fi fantasy favourite Artemis Fowl – now available in paperback
Artemis Fowl the movie [Walt Disney Studios] will premiere on June 15th streaming exclusively on Disney + directed by Kenneth Branagh, starring newcomer Ferdia Shaw in the title role alongside Dame Judi Dench and Colin Farrell
The new fantasy series sees Artemis’s twin brothers at the helm of a dangerously fast-paced adventure. With their brother, criminal virtuoso Artemis Fowl, away on a five-year mission to Mars, the younger Fowl children, 11- year-old twins Myles and Beckett, have been left alone at the Fowl family home.
One night, the twins manage to accidently get caught up in an interspecies dispute when a troll burrows out of the Earth’s core right in front of Beckett’s eyes! In the events that follow the boys are shot at, kidnapped, buried, arrested, threatened and even temporarily killed but, despite their differences, the twins find that there is no force stronger than the bond between them.
The Fowl Twins features Eoin’s trademark humour, prescient technological inventions and modern re-telling of fairy folklore. The book can be enjoyed as a standalone by readers new to the Fowl universe and will be a welcome return to a familiar world for existing Fowl fans.

Praise for The Fowl Twins

“Colfer’s playfulness is in full swing…” THE GUARDIAN

“Colfer is a hugely entertaining writer who unravels his plot at breakneck speed while never stinting on the detail.”
THE DAILY TELEGRAPH