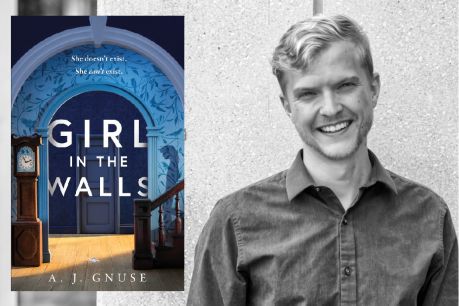 Join us with Author AJ Gnuse as we celebrate the launch of his debut thriller Girl in the Walls.
He'll be talking with Ben Moorhouse and taking questions from the virtual audience.
Pick your ticket and book choice (with or without postage) and you'll receive the registration link around 24-hours before the event.

‘Bold and compelling, subtle and sublime, with writing so good that you're torn between racing ahead and lingering. I found myself holding my breath and never wanting to leave, despite the darkness. A uniquely gothic tale about grief, belonging and hiding in plain sight’ Jess Kidd, author of Things in Jars

The Miniaturist meets Where the Crawdads Sing, in this haunting, suspenseful and beautifully written gothic debut.

‘Those who live in the walls must adjust, must twist themselves around in their home,stretching themselves until they’re as thin as air. Not everyone can do what they can. But soon enough, they can’t help themselves. Signs of their presence remain in a house.Eventually, every hidden thing is found.’

Elise knows every inch of the house. She knows which boards will creak. She knows where the gaps are in the walls. She knows which parts can take her in, hide her away. It’s home, after all. The home her parents made for her. And home is where you stay, no matter what.

Eddie calls the same house his home. Eddie is almost a teenager now. He must no longer believe in the girl he sometimes sees from the corner of his eye. He needs her to disappear. But when his older brother senses her, too, they are faced with a question: how do they get rid of someone they aren’t sure even exists?

And, if they cast her out, what other threats might they invite in?

About the author
A native of New Orleans, Louisiana, Adam Gnuse received an MFA in fiction from UNC Wilmington and was a 2018 Kenyon Review Summer Workshop Peter Taylor fellow. His short stories have been published, or are forthcoming, in Guernica, The Los Angeles Review, New South, Passages North, The Potomac Review, The Wisconsin Review, and other magazines.

Girl in the Walls is Adam’s first novel.

‘Gnuse is a writer of vision, who builds up his novel like the most exquisite music box.  It plays out perfectly, and will leave you entranced long after its covers are closed’ Ali Shaw, author of The Trees

‘Ever been deep underwater, holding your breath, wondering if you will make it to the surface? OK. Remember the most terrifying nightmare you’ve ever had? OK, so now: Here’s your book, Girl in the Walls, by Adam Gnuse. It’s really scary, and literary to boot, going way down deep, and way up high. Gnuse’s first novel says that he is the real thing, out of the gate. May the race be long, with many more novels. But he will be hard-pressed to out-do Girl in the Walls’ Clyde Edgerton, author of The Night Train and Killer Diller.