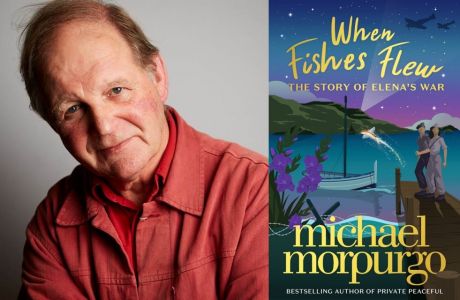 Festival favourite and master storyteller Michael Morpurgo introduces his new novel When Fishes Flew: The Story of Elena’s War, a sweeping tale of love and rescue set in Ithica, Greece.
Always an inspiring speaker, don’t miss Michael talking about his new characters and the background to a story that features magic, myth, mystery and some of the unsung, everyday heroes of World War Two.
Michael is being interviewed by Hannah Gold (author of The Last Bear)
This LIVE FESTIVAL EVENT is at the High Street Baptist Church in Tring. You can either enjoy this event at the venue or watch a virtual stream from home.

This first new novel in two years from the Nation's Favourite Storyteller is a sweeping story of love and rescue - an unforgettable journey to the Greek island of Ithaca, and back in time to World War Two... Australian-Greek girl Nandi travels to her ancestors' home in Ithaca, and discovers - through a friendship with an extremely unusual flying fish - the extraordinary story of her great-aunt Elena; of how she fell in love, in the hardest of times, and how of how she became an unsung hero of World War Two. But Elena has gone missing, and Nandi has to find her.

In her search, she will discover that Elena was an even greater hero than she thought - and still is... Nandi's story is a beautiful and inspiring tale of personal discovery, of love and place and belonging, threaded through with the quiet heroism of everyday people. Stunningly illustrated throughout by acclaimed artist George Butler, and full of magic, myth and mystery, it is a classic Morpurgo novel that will move and thrill every reader who loved Private Peaceful and War Horse, and combines all the hallmarks of this beloved Master Storyteller.

Michael Morpurgo, began writing stories in the early '70's, in response to the children in his class at the primary school where he taught in Kent.   One of the UK’s best-loved authors and storytellers, Michael was appointed Children’s Laureate in 2003, a post he helped to set up with Ted Hughes in 1999. He was awarded an OBE in 2007 and a Knighthood in the New Year’s Honours in 2018 for services to literature and charity. He has written over 150 books, including The Butterfly Lion, Kensuke’s Kingdom, Why the Whales Came, Private Peaceful and War Horse, which was adapted for a hugely successful stage production by the National Theatre and then, in 2011, for a film directed by Steven Spielberg. The most recent film adaptation of his books is Waiting for Anya directed by Ben Cookson. He has won numerous awards including those voted for by children themselves, the Blue Peter Book Award and the Children’s Book Award. His latest book is Boy Giant published by Harper Collins Children’s Books and Owl or Pussycat illustrated by Polly Dunbar and published by David Fickling Books.

A son and grandson of actors, Michael has acting in his blood and enjoys collaborating and performing live adaptations of his books at festivals, concerts and theatres.

Michael's books have been translated into many languages including Chinese, Bulgarian and Hungarian, Hebrew and Japanese.

With his wife Clare, he set up the charity Farms for City Children, which offers children and teachers from inner-city primary schools the chance to live and work in the countryside for a week on one of the charity’s three farms in Devon, Gloucestershire and Wales. Over 100,000 children have visited the three farms run by the charity since it began in 1976.  Teachers frequently comment that a child can learn more in a week on the farm than a year in the classroom.