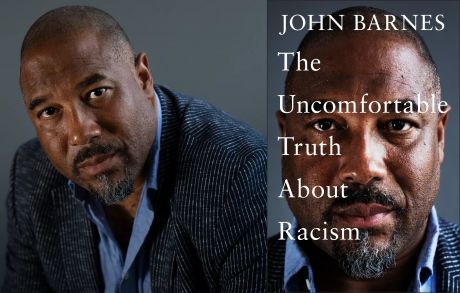 John Barnes is joined by fellow Watford and England legend Luther Blissett as they discuss John's new book The Uncomfortable Truth About Racism with the BBC's Mark Clemmit.
This LIVE FESTIVAL EVENT is at the High Street Baptist Church in Tring. You can either enjoy this event at the venue or watch a virtual stream from home.

The Uncomfortable Truth About Racism - HB £20

An eloquent and thought-provoking book on racism and prejudice by the Watford, Liverpool and England football legend John Barnes.

Born in Jamaica in 1963, John Barnes moved to the UK with his family in 1975 at the age of 12. Six years later he was a professional footballer, distinguishing himself for Watford, Liverpool and England, and in the process becoming this country's most prominent black player.
Barnes is now an articulate and captivating social commentator on a broad range of issues, and in The Uncomfortable Truth About Racism he tackles head-on the issues surrounding prejudice with his trademark intelligence and authority.
By vividly evoking his personal experiences, and holding a mirror to this country's past, present and future, Barnes provides a powerful and moving testimony. The Uncomfortable Truth About Racism will help to inform and advance the global conversation around society's ongoing battle with the awful stain of prejudice.

About John Barnes
John Barnes’ distinguished football career included six years at Watford and a decade at Liverpool. Whilst at Anfield, he played 403 games, scored 106 goals, and won the First Division twice, the FA Cup twice and the League Cup. He was the FWA Footballer of the Year in both 1988 and 1990.
Barnes won 79 caps for his country, scoring 11 goals and playing at the 1986 and 1990 World Cup finals, and the 1988 European Championships. In 1984, against Brazil in Rio, he scored what is widely considered to be the greatest ever individual goal for England. Barnes also played for Newcastle United and Charlton Athletic, and had spells managing Celtic, Jamaica and Tranmere Rovers.
Now a football pundit and social commentator, he regularly appears in the media to discuss issues around prejudice and discrimination.

John Barnes is joined by...

Great friend of Our Bookshop, Luther Blissett is Watford FC's all-time record appearance maker and goal scorer; the stats don’t lie when it comes to Luther Blissett’s Watford playing days.
After progressing through the club’s youth ranks, the prolific centre-forward went on to score 186 times in 503 outings during three separate spells at Vicarage Road after making his initial debut in the 1975/76 season.
A key part of Watford’s rise from the Fourth Division to a second-placed top-flight finish in 1982/83, Blissett became the Hornets’ first senior England international when scoring a hat-trick on his debut against Luxembourg in 1982.
After a year in Italy with AC Milan, the Jamaica-born striker returned to The Vic for another successful stint from 1984 until 1988, at which point he moved to Harry Redknapp’s Bournemouth and found the net more than 50 times in two-and-a-half seasons at Dean Court.
He was brought back home to Hertfordshire by Steve Perryman for a further two-year spell in 1991, and later served under Graham Taylor once more as part of the club’s coaching staff.

And our chair for the event is...

Mark Clemmit, known to many as Clem, is renowned for his relaxed access all areas style as the features reporter on BBC One′s Football Focus.
He is also part of the channel's studio presentation team on the country's most watched results programme Final Score and a reporter for Match of the Day Live.
In addition he is one of the longest established voices on BBC Radio 5 Live and has hosted the station’s flagship 5 Live Sport programme and their coverage of The Great North Run.
Mark has also reported for BBC One's topical daily magazine programme,The One Show.
In 2014 Mark presented a new peak time consumer series for BBC One, How Safe is Your House. The series saw him confront dodgy buildersand tackle a number of rogue tradesmen.
His additional role, very much in keeping with the one he’s established over the past decade and a half, as one of English football’s most familiar voices and faces – specialising in life below the Premier League and often championing the role of the underdog.
For the Football Association themselves he has facilitated a diverse range of activities covering everything from disability issues to the launch of the new England kit (with David Beckham).