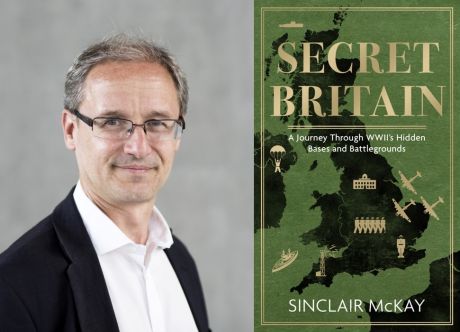 Join author and journalist, Sinclair McKay as he presents his remarkable new book Secret Britain. Listen to the stories of the brave men and women who worked, trained and fought in bases across the UK in an unbelievable effort to defeat the Nazis and win WWII.

A journey through WWII's hidden bases and battlegrounds

Discover the stories of the brave men and women who worked, trained and fought in bases across the UK in an unbelievable effort to defeat the Nazis and win the war.
From the bestselling author of The Secret Life of Bletchley Park and Bletchley Park Brainteasers comes an exciting new book that takes you on a tour around the top secret and confidential WWII bases and battlegrounds in the UK, and tells the story of the brave men and women who fought and trained in them.
From the outset of the Second World War, most of Britain felt like a mystery even to those who lived there. All road and railway signs were removed up and down the country to thwart potential enemy spies. An invisible web of cunning spread across the United Kingdom; secret laboratories were hidden in marshes, underground bases were built to conceal key strategic plans and grand country houses became secret and silent locations for eccentric boffins to do their confidential cryptography work.
In Secret Britain, Sinclair McKay maps out the UK through the hidden spots of WWII where you may not be aware that the war was fought. Journeying through secret wildernesses, suburbs, underground tunnels and manor houses, Sinclair gives a glimpse into the stories of the incredible people behind the war effort, and shows how you might go and visit these places yourself.
With his trademark warmth and compassion, Sinclair unearths the truths of the war that have remained under layers of secrecy since the war was won in 1945.

About Sinclair
Sinclair McKay is the author of the Sunday Times bestseller Bletchley Park Brainteasers as well as the bestselling Secret Life of Bletchley Park. He writes for the Spectator and the Telegraph and spends much of his life eyebrow-deep in dusty archives!